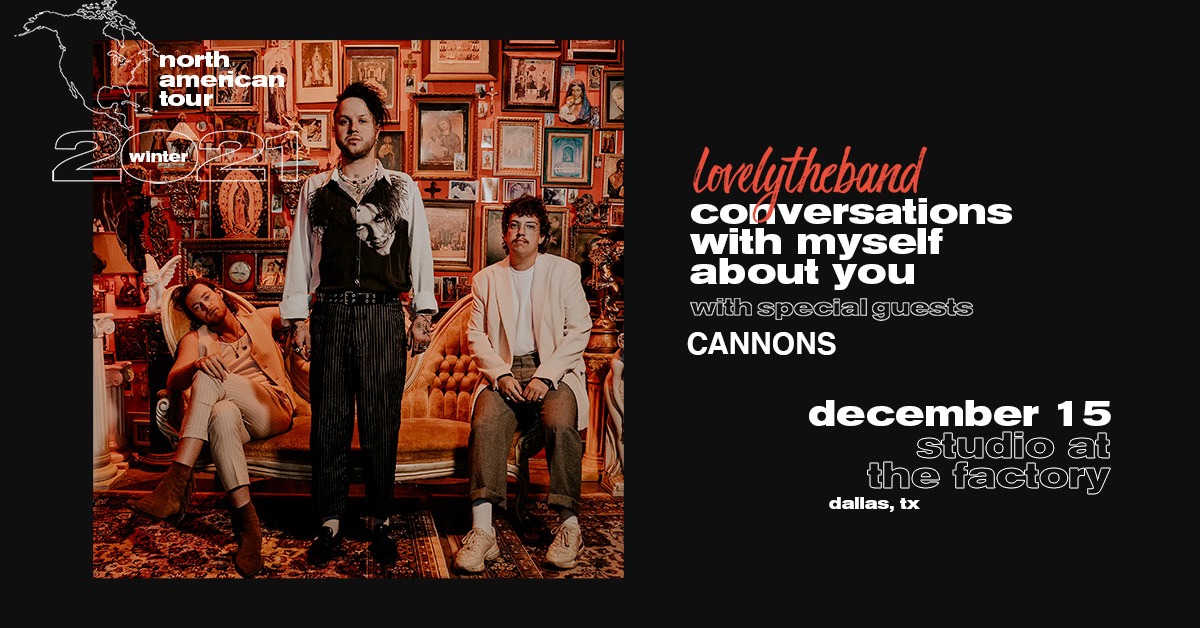 Doors: 7:00 PM / Show: 8:00 PM
All Ages
The Studio at the Factory
Dec 15, 2021
Buy Tickets
Music gives a voice to those who need it when they need it the most. Our favorite artists say the difficult things out loud, so we don't have to -- but can learn how to.

By the same token, lovelytheband translate emotions, anxieties, and feelings into lush, layered, and lively indie pop anthems. When the band was founded by lead singer Mitchy Collins, guitarist Jordan Greenwald and drummer Sam Price in 2017, the trio maintain a lasting connection to listeners by holding nothing back.

"I really believe the importance of songwriting is saying something when someone else doesn't know how to," affirms Mitchy. "In the songs, I'm talking about life, trials, tribulations, depression, anxiety, and shit I deal with as well as the headaches that come along with the good and bad days. My problems don't define me, but we should embrace every side of who we are. The message is, 'Everything will be fine.'"

This message immediately resonated among audiences everywhere. A centerpiece of the everything I could never say... EP, the group's debut single "broken" caught fire as "the longest running #1 track on Alternative Radio thus far in 2018" with six weeks at the top. In under a year, it amassed 25 million total global streams. BuzzFeed summed it up as "So. Damn. Good." Billboard proclaimed the group among "10 Rock & Alternative Artists to Watch in 2018" as they supported Vance Joy and AWOLNATION on tour between headlining dates everywhere. Everything paved the way for the arrival of the band's first full-length, finding it hard to smile [RED MUSIC]. Produced by "broken" collaborator Christian Medice, these 16 tracks entrance, engage, and enchant, offsetting shimmering keys, sweeping synths, and spacey guitars with cathartic, compelling, and catchy choruses.

The title speaks directly to its thematic push-and-pull.

"finding it hard to smile touches on my life," says Mitchy. "There are days when it's hard to even walk out of my front door or get out of bed. So, you find the will to power through, call on your friends, and rely on loved ones to pick you up when you're down and bring magic out of you. A lot of the record is about embracing who you are as well as dealing with relationships, breakups, nostalgia, and unrequited love. It's really introspective for me."

"I was walking around Los Angeles one day thinking," he recalls. "I left a party where I had a really good time at. Right after, I wrote the main lyric in my phone. I held onto it for a little while, but it eventually turned into a song about wanting love and wanting to fit in. I brought it to the guys in the studio, and they really took it to the next level. It becomes a lovelytheband song when everyone is on it."

Whether it's the feedback buzz and 808 rush of "pity party" or orchestral ambiance on "alone time," the soundscapes mirror the emotional ebb and flow encoded in the lyrics. Elsewhere, the intimate "maybe i'm afraid" unveils an infectious confession as the band admits their fears without filter.

"It's one of my proudest moments as a songwriter," says the frontman. "It turned into the story of relationship. You're in it. You know things are beautiful, but you're scared to commit to the other personal. I think a lot of people struggle with the same thing. It feels relatable."

As they round out 2018 on a headlining tour and hitting the stages of Lollapalooza, the Billboard Hot 100 Festival, and more, lovelytheband's voice will only get dramatically louder.

"I hope when you listen to it, you can find some solace or reassurance," Mitchy leaves off.

"Maybe you didn't know how to communicate something aloud, and it helps for us to talk about it. Hearing it might inspire you to make a move. Music moved me and gave me a little hope as a kid. I hope you can take away something from this in the same way my favorite records helped me. That would be my biggest goal with lovelytheband."

Your next event should be a full PRODUCTION- we can help 😎 Looking for a space for your upcoming holiday party, end-of-year soirée, or want to meet with our team to make your 2022 events unforgettable? Get in touch! 📩: privateevents@thefactoryde.com • • #privateevents #eventprofs #eventindustry #dallas #deepellum #thefactoryde #studioatthefactory #holidayparty #specialevents #venue #dallasvenue
ON SALE NOW: No reason to be sour, Lemon Boy, aka @lemon.socks aka CAVETOWN tickets are on-sale now! Can't wait to see him LIVE in Dallas on 4/5!
Whether you’re celebrating the season or saying so-long to 2021, we have the perfect event space for you! Visit the link in our bio to request more info on special December rates! • • • • #privateevents #eventindustry #deepellum #thefactoryde #specialevents #privatevenue #dallasvenue #venue #eventspace #holidayparties #dallastexas #DFWvenues #visitdallas
SHOW UPDATE: @dreamtheaterofficial will be taking over DALLAS at #TheFactoryDE on MARCH 19th!!! Tickets for the previous date will be honored at the new show 🤘 🎫: https://bit.ly/dreamtheaterDFW
Missed our last open house? We're back at it again! Come meet the team, see the venues with BTS tours, and learn more about becoming part of our team! Info here: https://bit.ly/factorycareers
STATEMENT FROM @daughtry: In light of recent events, Daughtry’s Dearly Beloved Tour will be rescheduling the remainder of this year’s shows into early 2022. Please hold on to your tickets as new dates will be announced in the coming days. Chris and his family appreciate all the love and support our fans have shown during this difficult time. We thank you for your understanding and look forward to seeing you again on the road.
JUST ANNOUNCED: @lemon.socks aka Cavetown is heading to Dallas on April 5th!! 🐈‍⬛🍋 • Ticket: on sale this Friday at 10 AM!
It's #NationalAdoptionDay! Thanks again to our sponsors Paws In The City for bringing by the CUUUTEST pups to our Soccer Watch Party on Friday! Learn more about them on their website: pawsinthecity.org
🎟 ON SALE NOW 🎟 Visit thefactoryde.com
Whether you’re rooting for US of A or Mexico, we’ve got the ultimate game setup ready to go! Gear up for our World Cup Qualifying WATCH PARTY- FREE to attend with RSVP! ⚽ • https://bit.ly/CONCACAFwatch
🚨Special December rates available.🚨 Let’s make it happen! #privateevents #eventprofs #eventindustry #dallas #deepellum #thefactoryde #studioatthefactory #holidayparty #specialevents #venue #dallasvenue
UPDATE: Your Factory ladies on deck….Cristina (Director of Events) and Tiya (Director of Operations) as your hosts THIS FRIDAY!!! Come for the fun! Come for some weird! #WorldCup #Qualifiers #USA #Mexico #DynamicDuo #CoHost #TheFactoryInDeepEllum #TheStudio #DeepEllum #Soccer #GOAL #weekendplans #WhoRunTheWorld #FCDallas #USMNT #Eltri
JUST ANNOUNCED: @thestorysofarca takes the stage in DALLAS on MAY 3! • Tickets on sale this Friday at Noon 🎫
JUST ANNOUNCED: Don’t miss this, @beaccchhoussse is taking Dallas on March 27th! Tickets on sale this Friday 🎫
POSTPONED: Theory Of A Deadman on 11/6 has been postponed. • Unfortunately, while we have been practicing CDC and locally recommended COVID-19 protocols on tour, members of the THEORY touring family still tested positive recently. For the safety of our band, crew members, venue staff, our families, and our awesome fans, we will regrettably be postponing our upcoming shows in Miami, OK, Dallas, TX and Houston, TX. We are sorry to miss you this weekend but we will be back soon! Stay safe.
After OPEN HOUSE rendezvous with the best! Thank you to all that came! Overwhelmed with the turn out!! More to come… #OpenHouse #Hiring #TheFactoryImDeepEllum #TheStudioAtTheFactory #JustHired #Hired #ForHire #DeepEllum #Dallas #LiveMusic
JUST ANNOUNCED: Get ready for LIVE, adrenaline-pumping action as IMPACT Wrestling brings HARD TO KILL to THE FACTORY, airing live on pay-per-view! 💥 Tickets on sale next Friday, 11/12 at 11 AM.
Can't believe it's already been ONE MONTH since reopening with Randy Rogers Band and Stone LaRue! 🤠
GIVEAWAY TIME! 💥 ZERO 9:36 is teaming up with @bandsintown to giveaway tickets to his upcoming tour with @neckdeepuk! 🎫•🎫•🎫•🎫•🎫•🎫•🎫 ENTER TO WIN TICKETS TO @ZERO IN DALLAS MONDAY NOV 8TH 🎫•🎫•🎫•🎫•🎫•🎫•🎫 TO ENTER: Visit the link in our bio and RSVP for the Dallas date to enter. Contest ends 11/5. Mark your calendars, can’t wait to see you there!
Stop by anytime noon until 8pm this WEDNESDAY for our venue OPEN HOUSE!! Our team is growing and we want YOU to be a part of it!
JUST ANNOUNCED:: @thebandcamino is taking THE TOUR CAMINO to Dallas! Tickets on sale this Friday 💥