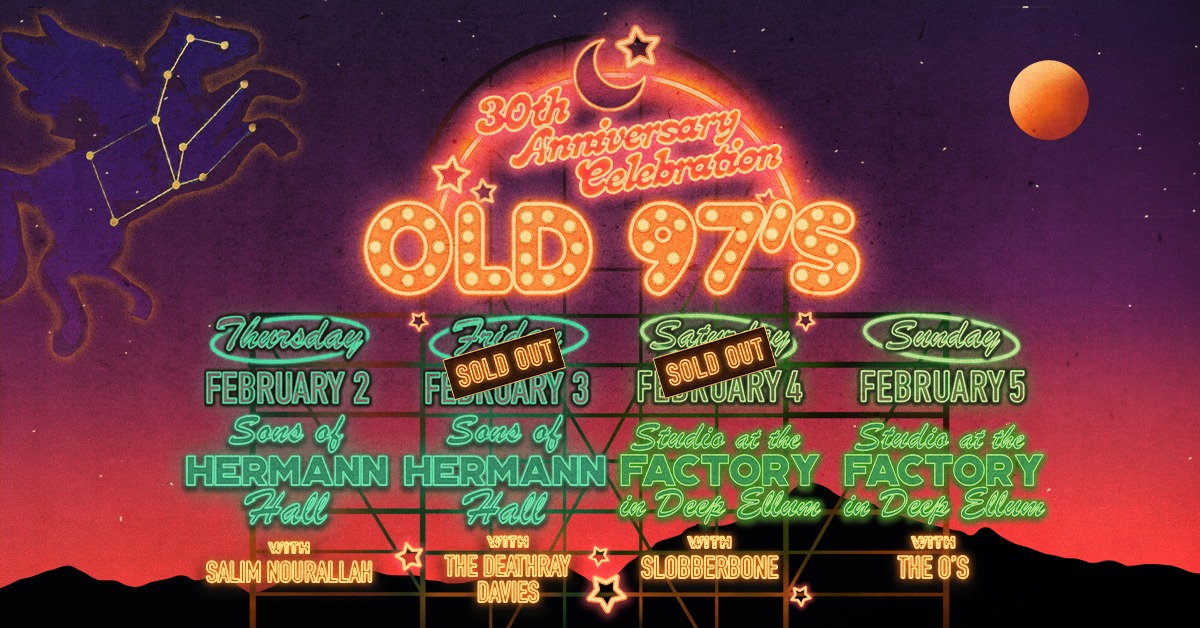 Old 97's is an American alternative country band from Dallas, Texas. Formed in 1992, they have since released twelve studio albums, two full extended plays, shared split duty on another, and have one live album. Their most recent release is Twelfth.

They were pioneers of the alt-country movement during the mid-to-late 1990s, but lead vocalist and primary songwriter Rhett Miller has described the band's style as "loud folk". The band's name is in reference to the Wreck of the Old 97.

Initially a popular Dallas bar band, Old 97's toured the country after releasing their first album, 1994's Hitchhike to Rhome and 1995's split EP release Stoned / Garage Sale with fellow Dallas band Funland on Idol Records. In Chicago, they caught the attention of Bloodshot Records and were signed to record their next album. 1995's Wreck Your Life brought them to the attention of Elektra Records, who hoped that alt-country could be a new post-grunge trend. Lead singer Rhett Miller, born in Austin, later lived in New York City and Los Angeles. Many of the band's songs include local Texas references, with references to New York City, Los Angeles, and Chicago appearing as well.

Their music has been featured in a number of films and TV series, including The Break-Up ("Salome", "Melt Show", "Timebomb"), Clay Pigeons ("Timebomb"), Slither ("The New Kid"), Ned's Declassified School Survival Guide ("Big Brown Eyes"), Ed ("Question", "King of All the World"), Scrubs ("Question"), Veronica Mars ("Adelaide", "Four-Leaf Clover", "The New Kid") and Scorpion ("Question"). With respect to The Break-Up, a key scene toward the end of the film takes place at an Old 97's concert.

Rhett Miller has recorded seven solo studio albums and one live album, with 2002's The Instigator. Murry Hammond's solo album, I Don't Know Where I'm Going But I'm on My Way, was released April 21, 2008.

Old 97's have been heralded as a great live band, although they claim never to rehearse their act. They included five live songs as a bonus disc on Satellite Rides, and released a live double CD set recorded at historic Gruene Hall in 2005, Alive & Wired.

Rhino Entertainment released Hit by a Train: The Best of Old 97's, an eighteen-track compilation of songs from the band's beginnings through 2001, featuring liner notes and an essay by rock critic Robert Christgau.

The band's tenth studio album, Most Messed Up, was released April 29, 2014, by ATO Records and was their best-selling album to date, reaching #30 on the Billboard 200.

Their next two releases on ATO Records were Graveyard Whistling, their 11th studio album, released February 24, 2017, and Love the Holidays, an album of mostly original Christmas songs, released November 16, 2018.

ATO Records released the band's next studio album, aptly named Twelfth, on August 21, 2020. The twelve tracks were produced by Vance Powell, who produced Graveyard Whistling. Old 97's noted that the recording sessions in Nashville started on the night of a deadly tornado outbreak and right before the COVID-19 pandemic hit.