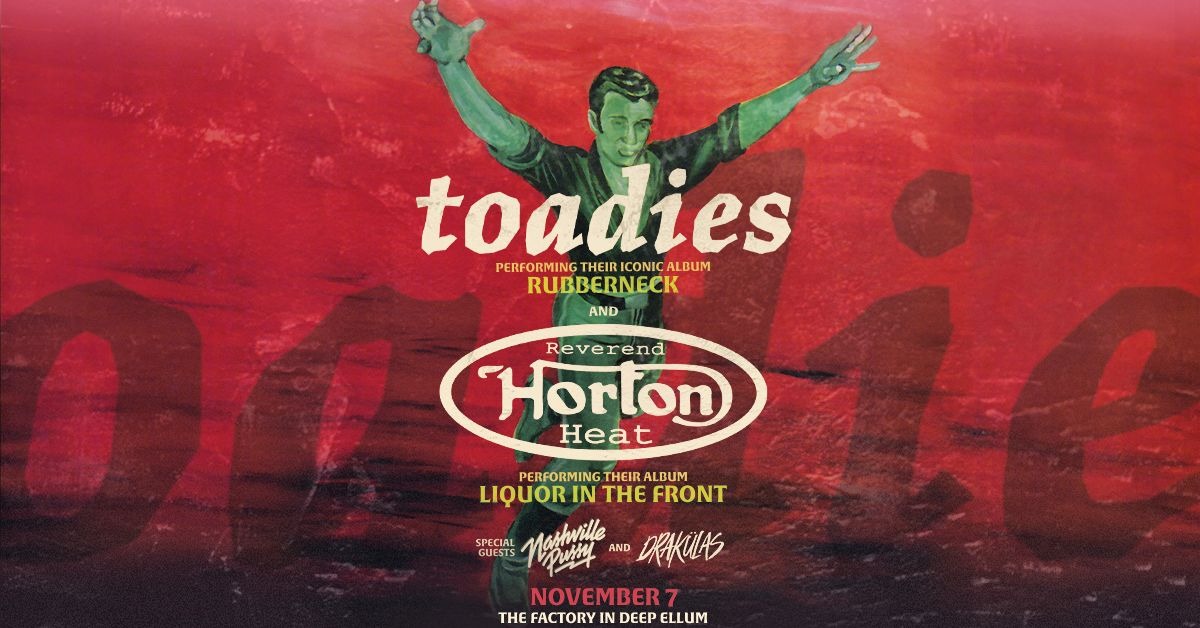 After bursting onto the national scene with their breakthrough Rubberneck album, which begat their signature single “Possum Kingdom,” the successful follow-up single “Away” and the immense fan favorite “Tyler,” Toadies have recently revisited their platinum-selling 1994 debut with a 20th anniversary reissue of the album.

The Toadies remain raw. Vaden Todd Lewis still sings as though he’s on the precipice of insanity, clinging tenaciously but perhaps already plummeting. Lewis’s and Clark Vogeler’s guitars rip and tear like thick fingernails at supple flesh. Mark Reznicek and bass player Doni Blair (who joined the band in 2008) fuel the fury with relentless, seething rhythm.

JUST ANNOUNCED🔥 @yungblud is headed to Dallas on March 1st! 🎫 Tix on sale this Friday 🎫
Get ready to shout GOOOOAAALLLL at our CONCACAF Fifa World Cup Qualifying WATCH PARTY! ⚽️ • • FREE to attend with RSVP! Grab your team and reserve your spots today! 🏆
JUST ANNOUNCED! @watchwhatcrappens is bringing their Hunky Dory Tour to DALLAS on April 21! Tickets on sale this Friday 🎫
THIS FRIDAY!! Have you secured your tickets for @dontoliver and special guest @bia? Tickets in link in bio! 🎫
Still reminiscing on THE AFTERBURNER TOUR 🔥📷: @r_clark777
We've never been good at goodbyes...😢 Tickets for @olivertree’s FINAL TOUR at #TheFactoryDE on March 24, 2022 are on sale NOW! 🤠
DALLAS! @olivertree is bringing his rodeo circus to #TheFactoryDE on March 24th! Tickets on sale Friday at 10am 🤠
POSTPONED: @purityring has been moved to July 16, 2022. • hey everyone, out of concern for the safety of our crew, our fans, ourselves and all our loved ones, we must postpone these tour dates once again. simply put, the pandemic is not yet over. we've rescheduled our fall tour dates for summer 2022. your tickets will be automatically transferred to the new date. we're not responsible for ticket sales so you must go to the place you bought them from to handle any changes. we apologize for the inconvenience and sadness this may bring. we understand how it feels — we’ve spent months working on a new live show that we’re really proud of and excited to share. nearly all our shows are indoors, and when we announced these dates last spring we imagined them being a celebration. the past two months have shown that what we hoped for is just not yet possible. it’s sad and hard and we wish we didn’t have to make this decision. we wish there was more assistance for people in our position where tour is their primary means of income. the decision of whether or not to play a show during a pandemic currently falls on the artist’s shoulders alone when it should be the responsibility of public health officials, national and local leaders, and the music industry at large to ensure the safety of artists, crew, concert goers and our families. having watched loved ones hurt, hospitalized and killed by this virus, we feel it would be insensitive and reckless to carry on with tour as if the pandemic isn’t happening. out of love and respect for those who have died, come too close, or who have to suffer the consequences of long covid, we regretfully must push our dates. please know that we so much look forward to seeing all of you and it’s been a difficult couple of years waiting for these shows to happen. in the meantime we are going to make some sounds and when the time comes that we can get on the road, we’ll have some exciting things to show you. whatever you do, please stay safe and remember to take care of each other. all our love, megan + corin
You ROCK… your job should too! 🤘 Visit our website and apply TODAY!
Hey DFW!🌹 A limited number of @teyanataylor tix have just been released!!! Grab ‘em before they’re gone. 🔥
REPOST: Dream Theater have made the difficult decision to move their October-December 2021 North American tour dates to early 2022. • All previously purchased tickets will be honored. Please consult your local point of purchase for any inquiries regarding refunds.
Just announced: @johnsongus is coming Jan 21 🎫🎫 on sale Friday @ 10 am
@wallowsmusic are bringing their Tell Me That It's Over Tour to Dallas on May 17 at The Factory in Deep Ellum. Tickets available Friday, Oct 8 at 10 am 🕙
This week 🔥🔥 we can’t wait for @randyrogersband and @stoneylarue kick off our fall concert season this Saturday, Oct 2. Tickets are still available, get them while you can!!
Artist Presale tickets for alt-J and Portugal. The Man at The Factory on March 9th are available NOW! Want Tickets?!? Sign up at altjandptm.com.
Are you ready? 😎
Just announced: @crankgameplays coming to you May 13 🎮 tickets on sale TODAY at 10 am
JUST ANNOUNCED! @unrealaltj and @portugaltheman on tour in North America in 2022! Coming to THE FACTORY IN DEEP ELLUM on MARCH 9 with special guest @sirchloe . Sign up for early access to pre-sale tickets at altjandptm.com. Tickets go on sale Friday 10/1 at 10am.